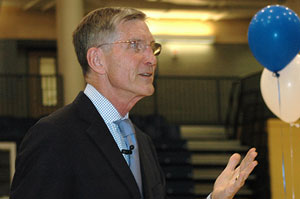 Six years ago the Northside Athletes Foundation (NAF) held its first annual Speaker Event featuring Reverend/Coach Joe Ehrmann. Joe’s message was so powerful it helped to generate a renewed focus among coaches, parents and children on the importance of “Coaching the Whole Child” vs. just a sport. Joe told the story of a parent who came to him, after the second week of practice, asking how his child was doing. Joe replied, “I will tell you in 20 years, when we see what kind of father, what kind of community leader, what kind of husband he is.”

Coach Bill Curry gave a passionate talk about the many coaches, players and parents who had an influence on his life. Curry said “There are only 2 pains in life, the pain of discipline and the pain of regret. The pain of discipline is a choice and the pain of regret is a lifetime of knowing what could have been if you had given your ALL at everything you do. You are the only person who can make that decision”. Coach Curry delivered a message that will be remembered by all who attended and will help further the NAF mission of “Youth Character Development through Sports”.

The Goal of the NAF’s Speaker Series is to continue to deliver powerful character development messages to those important people who influence our youth. The NAF Board members remember the huge influence coaches had on their childhood and lives with them today. Just one season with a coach represents 1/20th of a child’s most impressionable development years. While coaching a sport, a coach has the perfect opportunity to not only teach the sport but also to teach the more lasting life lessons of Character, Leadership and Teamwork.

← Letter From The PresidentNAF Contributes to FCA →

To uncover your true potential you must first find your own limits and then you have to have the courage to blow past them.